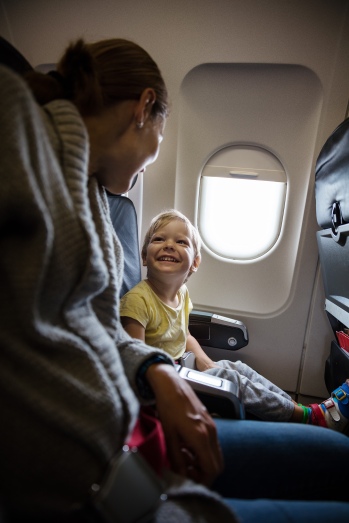 “Don’t you want to watch a movie?”

The person across from me on the airplane, had a toddler squirming on her lap. She was desperately trying to get him to watch the onboard movie screen. The boy eyed the long empty aisle in front of him. Clearly, he was more interested in sprinting down the aisle than watching a movie on mom’s lap.

I sympathized with this woman because I found myself in a similar situation the first time, I flew with my twin toddlers. After flying regularly with them, I’ve learned a few tricks that I wish I knew then. I’m going to share my mistakes with you so you don’t have to learn the hard way as I did.

Not Buying A Seat

Flying is expensive. Since my twins were under the age of two, I thought that saving the money by not buying two seats would be worth it. What I didn’t stop to think about is my twins have never sat quietly on my lap for three hours so why would they start doing so on an airplane? Like the boy I saw on the airplane, all they wanted to do was run up and down that aisle.

Not Bringing a Car Seat

Since I didn’t purchase seats, I couldn’t bring a car seat for them to sit in. If I had, they would have been buckled in like in a car ride, unable to wiggle on my lap or run down the aisle. For their next flight, I did bring the cars seats and I was shocked to see both kids sleeping for most of the flight. It was worth the extra cost of the tickets.

Not Booking A Nonstop Flight

Before having kids, my husband I always flew the least expensive method which usually meant at one stopover. Since we never had issues doing so before, we had a stopover with our first flight with twin toddlers. What I didn’t consider was how difficult it is to transport twin toddlers and all their belongings to another plane. Plus, the extra time stopping added to the travel was exhausting.

Letting Them Bring Their Own Backpacks

I let each of my kids pack their own backpacks as a fun way for them to get excited about traveling. That worked. What didn’t work was them carrying their own backpacks. They either kept forgetting it or they were too heavy and either me or my husband ended up having to carry it. On future flights it was much easier to pack all of their things in a carry-on bag with wheels.

The first time I traveled with them, I brought the usual boring snacks like Cheerios. They didn’t get very excited about it. The next time I tried bringing snacks that they don’t eat often, but I knew they liked. This entertained them for a little while.

Not Bringing Lots of Changes of Clothes

Electronics like iPads and on-board movies often don’t work or deplete the battery before the flight is over. Plus, toddlers can become easily bored with electronics. On future flights I packed coloring books or activities and games that they had never seen before so that it was new and exciting for them.

Not Prepared for Ear Popping

Both of my kids had trouble with the air pressure changes on the plane. They were too young to chew gum, and I didn’t know how to help their pain. I later learned that yawning or sucking on a straw or lollipop can reduce the pain.

That first flight with my toddlers was a nightmare. But by learning from my mistakes, I was able to have a reality stress free trip, and you can too.

2 thoughts on “8 Mistakes I Made When Flying With Toddlers”